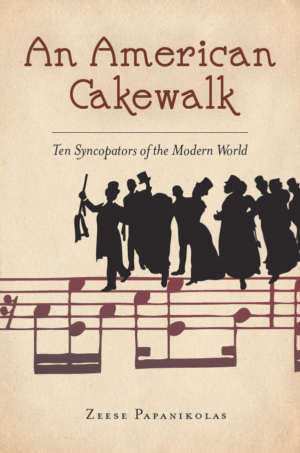 “The profound economic and social changes in the post-Civil War United States created new challenges to a nation founded on Enlightenment and transcendental values, religious certainties, and rural traditions. Newly-freed African Americans, emboldened women, intellectuals and artists, and a polyglot tide of immigrants found themselves in a restless new world of railroads, factories, and skyscrapers where old assumptions were being challenged and new values had yet to be created.

Just as ragtime composers subverted musical expectations by combining European march timing with African syncopations, so this book’s protagonists—who range from Emily Dickinson to Thorstein Veblen and from Henry and William James to Charles Mingus—interrogated the modern American world through their own “syncopations” of cultural givens. The old antebellum slave dance, the cakewalk, with its parody of the manners and pretensions of the white folks in the Big House, provides a template of how the tricksters, shamans, poets, philosophers, ragtime pianists, and jazz musicians who inhabit this book used the arts of parody, satire, and disguise to subvert American cultural norms and to create new works of astonishing beauty and intellectual vigor.”

(An American Cakewalk) is a delight. Once I waded in, I did not want to be called back to shore. Not a cultural history, nor an argument with others, this book is a labor of love, serious in its prose and intentions, abounding with insight, written with verve and grace. George Cotkin, author of Dive Deeper: Journeys with Moby Dick

The great appeal of this book is its freedom from conventional categories, its charming, at times moving, style of writing, which captures a special rhythm in American popular culture. This is an important book and literate Americans should read it. John Dizikes, Professor Emeritus of American Studies, University of California, Santa Cruz

Papanikolas…provides a new and refreshing glimpse of a cadre of individuals he labels “syncopators” – slightly offbeat, marginalized people who often marched to the beat of the proverbial “different drummer”…Highly recommended. P. D. Travis, Choice

More often than not, the book is more akin to a vividly impressionistic novel than most academic texts….(T)he book is undoubtedly the result of rigorous research, deep engagement and passion for the primary materials it explores. This combination of style and substance is a rare and heady mix that is ultimately far more satisfying as a result. Adam Burns, History: The Journal of the Historical Association

Published by and available at Stanford University Press. Also available at Indiebound.org and at Powells.com.