Louis Tikas and the Ludlow Massacre

From the Foreword by Wallace Stegner 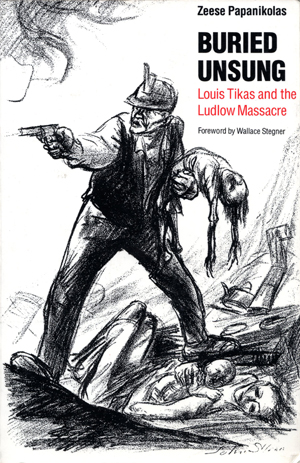 Central to his story of Louis Tikas and his friends is the 1913 strike in the Colorado coal mines whose bloody climax has come to be known as the Ludlow Massacre. It was the event in which Louis Tikas died, and it was a watershed event. One of the bleakest and blackest episodes of American labor history, it killed many people, including many women and children burned to death in the firing of the strikers’ camp; and in annihilating the strikers it also all but killed the union in Colorado and set back the cause of unionism there for a generation. It may or may not have touched the conscience of John D. Rockefeller II, dominant director of Colorado Fuel and Iron – he seems to have been more misled and confused than personally guilty. But it did touch the conscience of the nation, and if it did not make raw corporate gun-law impossible, it gave it a bad name. At the very least, it made corporations more careful.

That was Louis Tikas’ contribution: his life, lost in the effort to find a degree of justice, a portion of security, a moiety of self-respect, for himself and the Greeks, Italians, Austrians, and South Slavs who were his companions in America. The story is a little Iliad from the losers’ side – a confrontation, a catalog of leaders and champions, shifting tactics, reinforcements, hopes lifted and hopes dashed, preparations, desperations, a siege, a battle, catastrophe, choral comment.

In this stunning book, one of the most exciting I have read in a decade, Zeese Papanikolas records the turbulent and dramatic story of these Greek miners. The book’s title refers to that fear in the hearts of these young Greeks that they would die in a strange land and be buried without any final rites, prayers by a priest or the mourning of mothers and sisters they had left in Greece.

The achievement of Buried Unsung is that from these scant clues, a false name, a few newspaper items, some photographs and an unmarked grave, Zeese Papanikolas has given Louis Tikas another life that bears the eternity of a legend. The mystery and drama of his journey to resurrect Tikas and discover his own soul still haunt me weeks after I finished reading the book. Harry Mark Petrakis, Chicago Tribune

Papanikolas brings to Buried Unsung a gift for moving prose and an intimate understanding of those Greek cultural values that affected the Ludlow strikers. He follows the peculiar Greek coffeehouse network across the West searching for a man identified by only a few lines and a fading photograph. His search becomes as much a part of the story as Tikas himself…When the book ends on a lonely back road in Crete, one can only mutter “This is why I became a historian.” James C. Foster, American Historical Review

And that was all. The old-timers, who had taken so little from the world, would simply disappear. That winter John Tsanakatsis had died in Las Vegas. I was left with a dim memory of a sporty cap and a marvelous Cretan laugh. And as for Louis Tikas – it was as if he were destined to remain suspended between the past, which could never be fully recovered, and that posterity I could not, finally create for him. . .

But I knew I would go back to Greece. It was only there that I could in some way make my peace with this story, and with Louis Tikas – or what remained of him. There had been a custom in the back country of the Greece of Tikas’ childhood, and it was at once both primitive and revealing. Seven years after the burial of a man the villagers would dig up his bones and wash the dirt from them. If the bones were clean, then the dead man’s soul had been liberated from the agony of this world and had entered the realm of Death. But sometimes it happened that a few shreds of flesh still clung to the bone, and this was the sign borne by those killed by violence, the unavenged. The ghosts of these corpses were driven to haunt the living, themselves neither living nor dead, until the last shreds of flesh had been stripped away. I kept remembering how Mary Thomas had stood at the elevator of her hotel and told me she often dreamed about Ludlow. Dreamed about it yet. And then, with the thin edge of the actress she had always aspired to be rising in her voice, she said, “If you go to Greece again, tell them from me that they can be proud of the Greeks we had there. That every one was a hero. I have tears coming to me. That’s the way I feel about that.” Then she said, “You write this and take it to the Greeks because they had a pretty good man there in Louis.” It had been that seven years and more since I’d first come across Louis Tikas’ name in the library basement. I had dug what I could of him out of America.

Available at: University of Nebraska Press, Powells.com, and Indiebound.org