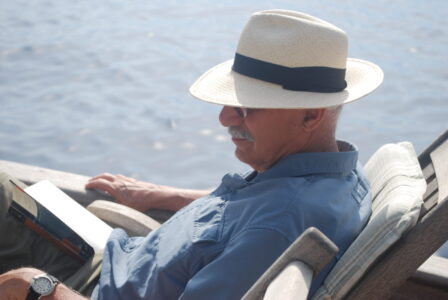 I’m beginning to think the most consistent element in my work is my wonder at waking up in the unlikely experiment of America. What I’ve learned from this awakening has something in it of my parents’ stories of the immigrant world of the Utah industrial towns they grew up in, stories that contained much humor and fun but also a foretaste of the cruelty and optimism and the many fractures of the country itself. I absorbed too the rhythm of the landscape of the American West we drove through on our travels, my mother and father in the front of the car reminiscing, my sister and I fidgeting in the back: the Burma Shave signs and the sage brush and the procession of distant buttes that came into view and then were left behind, the occasional patches of green around a stream or a river, the farms and the pastures and the Sunday-morning pathos of the little towns.

The making of my book Buried Unsung, the biography of the Greek immigrant organizer Louis Tikas, who was murdered in the 1914 battle between striking miners and the Colorado National Guard that came to be known as the Ludlow Massacre, has left deep marks on me and my writing. Traveling through Utah and Colorado recording the memories of old men and women, I discovered something I found of the greatest importance: as much as love or humor or imagination, there can be a clarifying anger moving a page of writing. The writing I care most about—my own and that of others—is always, in some deep sense, political.

I’ve always been a reader—a completely, gloriously unsystematic reader. I’ve written about Wobblies and Cakewalkers, Mormon Dream Miners and cowboys, American artists and intellectuals and all of these subjects were directed by an itch to understand them in my own terms. That itch was especially maddening when I started to read the myths of the Native people of the Great Basin, which were so unlike the European myths and fairy tales I knew. I discovered that the only way to understand these Indian tales was as part of a whole fabric made conjointly and even haphazardly by the story teller and the audience. I think I’ve always been drawn to this way of storytelling. I’ll start looking at a theme by playing off a group of explorers of the world and the mind against each other, and if I do have my own ideas about where all of this is going, I let my readers weave their own thoughts into the web, and draw their own conclusions. It might make my books hard to categorize, but that’s how I like it.